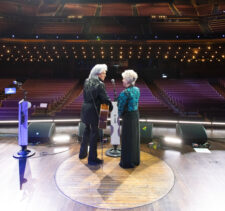 Marty Stuart and Connie Smith photographed on stage at the Grand Ole Opry moments after the live broadcast was finished Saturday, September 26, 2020. This marked the final performance before the 95th Anniversary of the Opry which saw the return of a socially distanced crowd of 500 people.

Marty Stuart’s Congress of Country Music will be a music flagship of his hometown, Philadelphia, Mississippi. The $30 million project will include a performance space, museum and educational facility.

“Being part of a project that brings life back to the Ellis and creates an environment of goodwill within the community is incredibly meaningful to me,” said Marty Stuart in a statement. “So many people in Philadelphia have memories of going to movies at the Ellis. The films I saw here growing up fueled my imagination and lit dreams in my heart that are still alive to this day.”

Noise11.com Chief Operating Officer Nick Kontonicolas said, “the reality of the bricks and mortar addition to Marty Stuart’s Congress of Country Music showcases the reality of the project to the people of Mississippi. The construction of the Congress of Country Music will place Philadelphia, Mississippi on the map of great US music towns such as Austin, New Orleans and Nashville”.

“The Ellis stage will be home to live concerts, Arts Council productions that give local kids a voice, television tapings, film premiers and festivals, Country Music Trail Marker induction ceremonies, and much more,” said Marty. “These gatherings at the Congress of Country Music will live on to inspire generations to come.”

Marty Stuart is a former guitarist for both Johnny Cash and Lester Flatt. He is a member of the Grand Ole Opry and Country Music Hall of Fame. He is a multi- Grammy Award winner and has won awards from the Country Music Association, Americana Music Honors & Awards and the International Bluegrass Music Awards.

Marty hosted the Big Night (At The Museum) for the Country Music Hall of Fame this week.