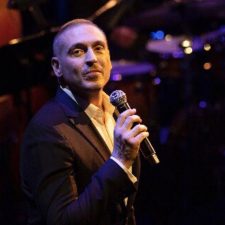 In a statement Jane Cho said:

“Michael’s family and I would like to extend our sincere thanks and gratitude to everyone for their kind words, tributes and support. The monumental outpouring of love for Michael is testament to the incredible man he was.

I have always been very proud of Michael but I have been especially awed by his positivity and strength this past year. Even during his most trying days, Michael continued to put his loved ones first and his buoyancy provided comfort and calm to so many.

Michael’s contribution to the entertainment industry was enormous. He was breathtakingly talented and adored his work, and he was also passionate about creating pathways and opportunities for others. We have been deeply moved by the beautiful tributes that have flowed throughout the week. It’s a moving reminder of how respected and revered Michael was in the industry he loved and dedicated his life to and what a profound impact he has had.

Family, friends and fans alike knew Michael for his cheekiness, irreverence and abundant charm; the latter of which got him out of trouble too many times to count.

We will remember him for his beaming smile, which was shadowed only by his giant heart.

Michael’s wish was to shine a light on germ cell cancer and other lesser-known cancers, which require better treatments, clinical trials and resources.

Chris O’Brien Lifehouse, where Michael was lovingly cared for during his treatment, is the largest cancer clinical trial centre in New South Wales. Research and trials are carried out by the same clinicians who treat patients, shortening the path between discovery and new treatments.

For those wishing to show their love and respect, we have set up a fund in memory of Michael to collect donations specifically to fund research, trials and resources in this area.

Michael would have encouraged anyone impacted by his remarkable life to donate to this cause.”

Donations can be made at donate.mylifehouse.org.au/tribute/michael-falzon.

A special service to commemorate Michael’s life will be held next week in Sydney and will be broadcast online. More details to follow.