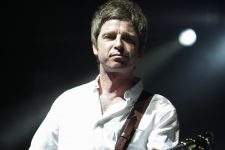 Gallagher was a huge fans of Lennon.

Noel was asked by Lennon’s son to be a part of the upcoming LP to celebrate what would have been his father’s 80th birthday.

According to The Sun newspaper’s Bizarre column, Noel has been recording his song at London’s Tileyard studios.
A source told the tabloid: “Sean wanted Noel on board because of his love of The Beatles and John and also in recognition of the massive impact he’s had on the UK music scene over the last decades.”

Noel famously lifted lines from Lennon from tapes he had of conversations the music icon had just before he was shot dead outside his apartment at the Dakota Building in New York in 1980 on Oasis’ hit ‘Don’t Look Back in Anger’.

The track from the Britpop legends’ 1996 LP ‘What’s the Story (Morning Glory?)’ also features a piano introduction which resembles both Lennon’s songs ‘Imagine’ and ‘Watching the Wheels’.

Gallagher previously said: “I got this tape in the United States that had apparently been burgled from the Dakota Hotel and someone had found these cassettes. Lennon was starting to record his memoirs on tape. He’s going on about ‘trying to start a revolution from me bed, because they said the brains I had went to my head.’

On Lennon’s 80th birthday on Friday, Noel shared a clip of himself singing ‘Mind Games’ from his 1973 solo LP of the same name on Instagram.