Oasis 'Wonderwall' Has Been Streamed Over 1 Billion Times - Noise11.com 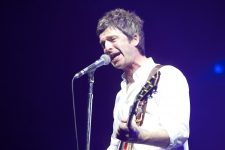 Oasis ‘Wonderwall’ Has Been Streamed Over 1 Billion Times

Oasis ‘Wonderwall’ – which featured on the Britpop band’s second studio album, ‘(What’s the Story) Morning Glory?’ – has had a resurgence on the streaming platform thanks to the recent release of the 25th anniversary edition of the 1995 album, helping it to achieve the impressive milestone of one billion streams.

‘Wonderwall’ was released as a single on October 30, 1995, and so the latest achievement comes just weeks ahead of the track’s own 25th anniversary.

The single was also revealed recently by BBC Radio 2 as number one in the Official Top 50 Britpop Songs with sales of 1.4 million, as Oasis claimed over half of the top 10 titles with six tracks.

‘(What’s The Story) Morning Glory?’ – which was recently released on limited edition picture disc and silver coloured vinyl with remastered audio to mark its 25th anniversary – is also currently number three in the Official Album Chart, marking the highest chart position for the record since August 1996, with a 640 percent sales increase week on week.

The album is also currently number one in the Official Vinyl Album Chart, and is the UK’s third best selling studio album of all time, as well as having a global sales total in excess of 22 million.

The iconic Manchester band’s back catalogue has also seen huge growth recently as ‘Time Flies 1994 – 2009’, ‘Definitely Maybe’ and ‘(What’s The Story) Morning Glory?’ have remained in the Official Album Chart throughout 2020.

Oasis split in 2009 following a fight between brothers Noel and Liam Gallagher, who are still at loggerheads to this day.