Kylie Minogue is no longer afraid to revisit the past and connect with her original audience. With Kiss Me Once, Kylie is musically born again, comfortable with being the Kylie Minogue was when she began.

In a first for Kylie, the Minogue Kiss Me Once tour revolves around the entire musical career of instead of focusing on a recent album. The formula takes the audience on a remarkable 30 years of pop journey. The 80s even gets a complete cluster on its own with ‘Hand On My Heart’, ‘Never Too Late’, ‘Got To Be Certain’ and ‘I Should Be So Lucky’ midway through the setlist. 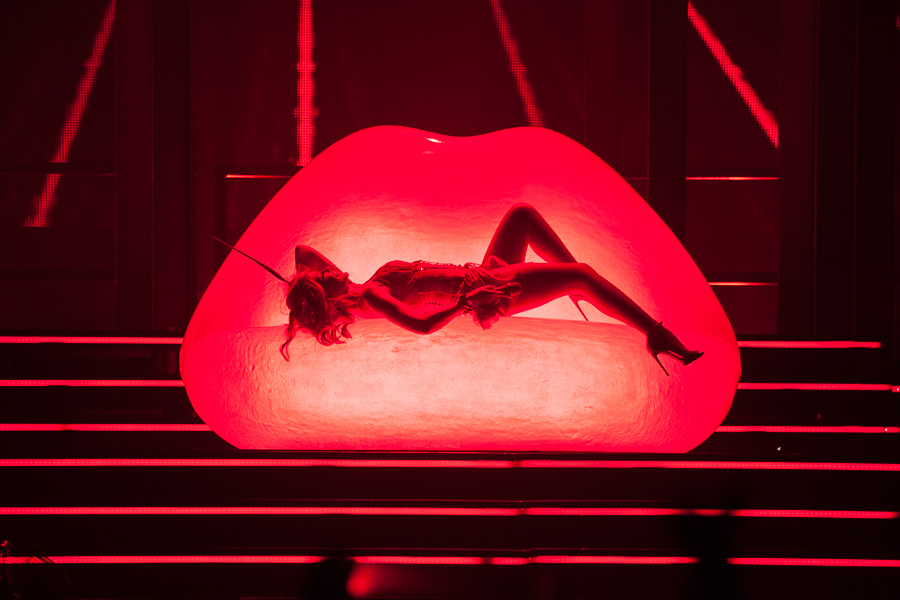 ‘Step Back In Time’ from 1990 is four songs in to the show. ‘Tears On My Pillow’ and ‘The Loco-Motion’ also get a run. When Kylie is Kylie and doesn’t try to compete with Beyonce or Gaga, she gets it so right.

Kylie seemed remarkably relaxed with her performance. Never before have I seen her spend 2-3 minutes talking to the audience. Kiss Me Once often goes one on one like a gigantic lounge room show placed in an arena. 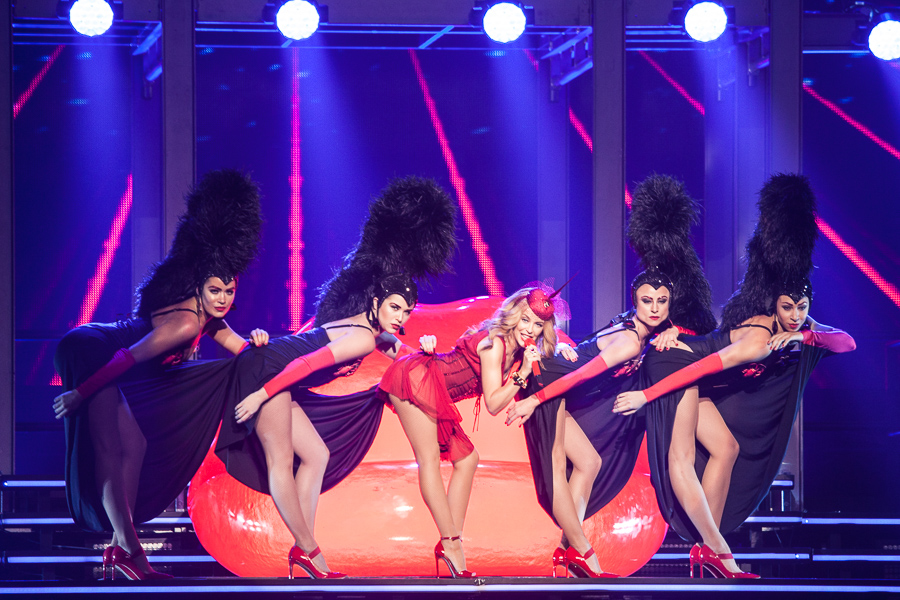 Of course, every Melbourne show being a hometown gig for Ms Minogue means that many, many Minogues are in the audience and a shout out to her Dad to “look away at certain parts, Dad’ drew chuckles from the crowd.

Kylie had one poignant moment in the show when she performs a note perform rendition of INXS ‘Need You Tonight’ in honour of her former boyfriend Michael Hutchence.

The other nod to the past is the inclusion of electronic pop genius Giorgio Moroder. Kylie was clearly in awe of Moroder, the man behind most of the hits for Donna Summer, when he joined the show to perform on their new song ‘Right Here Right Now’ from his album ’74 Is The New 24’. 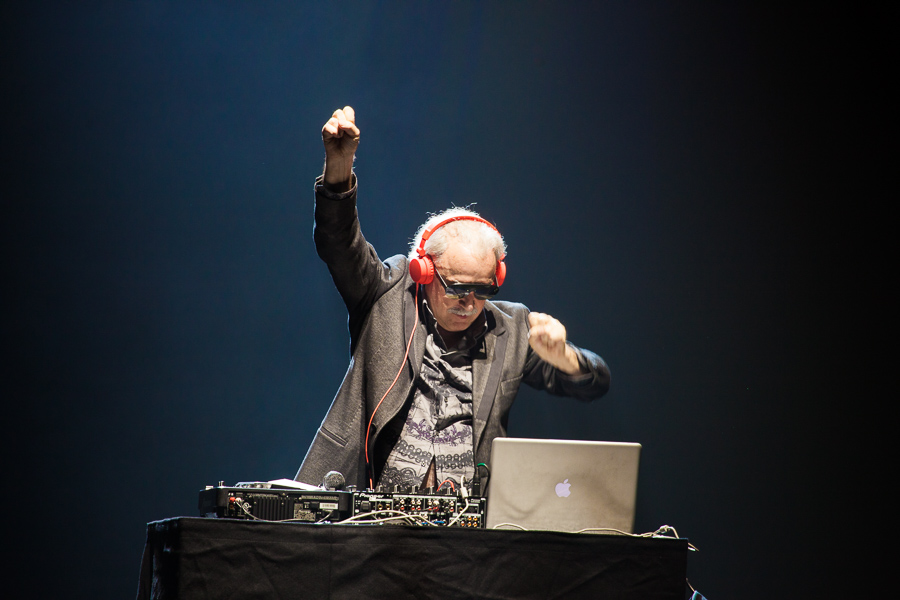 Kylie also conversed with Giorgio about his past and sang a few parts of Summer’s ‘Love To Love You Baby’ and ‘I Feel Love’. That was truly the “once in a lifetime” moment in the show. We will rarely see the Minogue/Moroder combination, if ever again, outside of this tour.

Moroder also performed a DJ set before the show featuring all songs he had produced, many by Summer including ‘Hot Stuff’, ‘On The Radio’, ‘Last Dance’, ‘Bad Girls’, Love To Love You Baby’ and ‘I Feel Love’ as well as Blondie’s ‘Call Me’, Irene Cara’s ‘Flashdance’ and from Daft Punk’s ‘Random Access Memories’ ‘Giorgio By Moroder’. 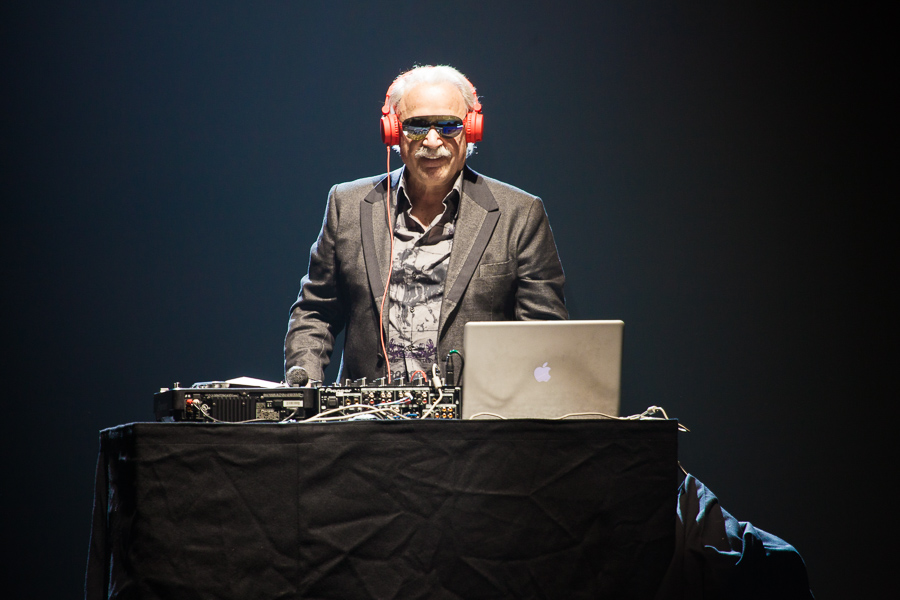 While the Kylie set visually was not as large as the previous tour (remember the over the top fountains on stage inside the arena) what this show lacks in gimmickry it more than makes up in personality and entertainment value.

The Kylie performance started 10 minutes late to allow Channel 7 time to re-create a scene for the upcoming Molly Meldrum mini-series. The iconic TV host was in attendance for 7 to film a scene set 5 weeks after his brush with death, most likely to be included at the end of the series, coming later this year.

Kylie’s ‘Kiss Me Once’ show may not be the biggest show she has ever presented, but it is the best.

Tagged as: Giorgio Moroder, Kiss Me Once, Kylie, Kylie Minogue

The 80s had its own sound and The Human League were the sound of the crowd.

The Human League have kicked off their headline tour of Australia in Adelaide after a warm-up opening for Culture Club last weekend. One song that is sure to get a run wasn’t originally a Human League song at all but has become one of their greatest hits live.

We are less than three weeks away from the release of Giorgio Moroder's first album of new material in thirty years, Deja Vu, and it sounds like it's going to be one big dance marathon.

Giorgio Moroder has revealed another taste of his upcoming album 'Déjà Vu' with a cover of Suzanne Vega's 'Tom's Diner' featuring Britney Spears.

Kylie Minogue has kicked off her Kiss Me Once tour in Perth covering the Donna Summer classic ‘I Feel Love’ with the man who made the original, Giorgio Moroder.

Giorgio Moroder will perform his own shows in Sydney, Melbourne and Auckland as sideshows to the Kylie Minogue dates.