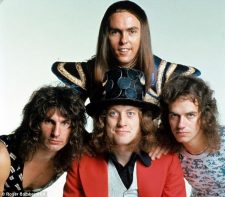 Slade Split In 1992 and Never Reformed

When Slade split in 1992 lead singer Noddy Holder always thought they’d get back together but it never happened.

Slade were one of England’s most successful bands of the 70s. They had 20 consecutive Top 20 singles and six number ones but by 1992 their popularity had faded.

“I’d been with the band for 25 years at that point of felt we’d been on a treadmill,” Noddy Holder tells Noise11.com. “It was album, tour, album, tour. After 25 years it felt like four marriages really. There were conflicts of course but we were always a happy-go-lucky band. We never had fights or anything like that. I just felt we were getting stale within the band. I walked away. We had no reunions”.

Noddy says, “People change when you get to a certain age. Dynamics in the band changed. We had different goals in life. I wanted to try other things. I always thought there would be a reunion. I always thought we would get back together, put our differences aside and go back to making a couple of world tours. But it never worked out that way”.

Occasionally reunion talks would start up but were soon quashed. “There was always some sort of conflict in the band with the members one way or another so it never worked out that way. I went on to have a career of my own that I enjoy”.

“They did a carbon copy of our version,” Noddy recalls. “We couldn’t believe it when we’d done it in ’73. It had become a big hit everywhere in the world except America. They brought it out in ’83. They had pretty much tried to copy our version. The album it came from, their debut album, sold 10 million copies. It was the biggest selling debut album from any act ever and it sold on the strength of ‘Cum On Feel The Noize’. Of course, me and Jim (Lea) my co-writer, we benefited from it from the songwriting royalties. My bank manager was very, very, very happy and he still gives me a glass of whiskey when I go and see him now”.