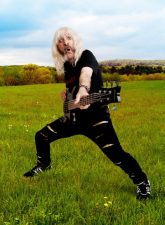 Guitar ‘legend’ Derek Smalls, both formerly and formally of Spinal Tap, will release his very first solo album in April and wow, look at the guests.

1. Openture – Derek with The Hungarian Studio Orchestra
The philosophy of this record, expressed in fewer words than I’ve taken to almost describe it.

3. Butt Call – Derek with Phil X (guitar, Bon Jovi) and Taylor Hawkins (drums, Foo Fighters)
In one lifetime, the telephone has gone from a miracle to a pain in the arse.

4. Smalls Change – Derek with The Hungarian Studio Orchestra, Judith Owen (vocals) Danny Kortchmar (guitar, Don Henley) and Russ Kunkel (drums, James Taylor)
Why Lukewarm Water is no longer bracketed by Fire and Ice. A nod to what’s past, and a wink to what’s next.

6. It Don’t Get Old – Derek with Peter Frampton (guitar, vocals) and Waddy Wachtel (guitar Keith Richards).
Life on the road, an endless series of pointless encounters. What could be better?

8. Faith No More – Derek with The Hungarian Studio Orchestra and Todd Sucherman (drums, Styx)
As I get older, I look back more fondly on all the people I’ve known. Except for Ian.

9. Gimme Some (More) Money – Derek with Paul Shaffer (piano and organ), Waddy Wachtel (guitar) and David Crosby (vocals)
Time and technology change everything, except the need for change.

10. MRI – Derek with Dweezil Zappa (guitars)
Everybody’s going to have one, eventually. It’s just another ride. To hell, but still….

11. Hell Toupee – Derek with The Hungarian Studio Orchestra
Think Satan doesn’t have dark thoughts about his appearance as he ages? Think again.

12. Gummin the Gash – Derek with Steve Vai (guitar), Gregg Bisonnette (drums, Ringo Starr) and Jane Lynch (vocals)
Losing your teeth closes one door, and opens another. A celebration of the meeting of two toothless cavities.

13. She Puts the Bitch in Obituary – Derek with Richard Thompson (guitar) and Jane Lynch (vocals)
A hymn to womanhood in all her splendor

Smalls Change will be released in April.