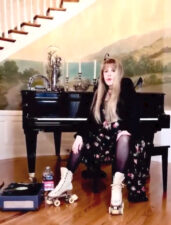 The Tik Tok challenge started with some guy called Nathan who posed a pic of himself on Roller Skates drinking cranberry juice while lip-synching to Fleetwood Mac’s ‘Dreams’. Fleetwood Mac’s Mick Fleetwood saw Nathan video, joined Tik Tok and uploaded his version of the clip. Now Stevie Nicks has made one too.