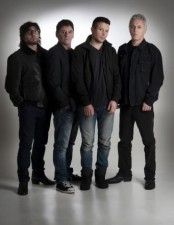 Taste To Reform For 2015 Shows

The original members of Taste, Ken Murdoch, Joey Amenta and Michael Tortoni will reform for shows in Sydney and Melbourne in November and December.

Taste formed in Melbourne in1975 and were one of the early bands to appear on Countdown giving them an instant national profile.

Taste had a string of radio hits including ‘Tickle Your Fancy’ and ‘Boys Will Be Boys’.

“We were just about to sign with Sire Records in the USA,” bassist Michael Tortoni recalls. “We had a tour lined up opening for Queen.” Freddie Mercury and the boys were vocal fans of Taste. They blasted Boys Will Be Boys each night before they took the stage of their A Night at the Opera tour.

“Taste had the makings of a long-term global success in my opinion,” he added. “Because 40 years later, we’re all still playing. None of us ever stopped. We learnt our craft in the shit-holes of Melbourne. Audiences would spit at you if you couldn’t do it. Until you got it right. And we did.”

Every member of Taste found success after the band. Tortoni created one of Melbourne’s best jazz venues Bennett’s Lane and the Melbourne Jazz Festival, Murdoch was John Farnham’s piano player pre-Taste and post-Taste has performed his own Piano Man shows constantly, Donati formed Southern Sons with Jack Jones and now lives in the USA and Amenta was a member of various acts after Taste including Moving Pictures, Dear Enemy, Wendy and the Rockets and Uncanny X-Men.

“As teenagers, we took ourselves very seriously as musicians,” Michael says. “When I listen to these albums now my mind boggles at how we actually wrote those songs at that age, with that quality of musicianship. There’s a lot of virtuosic playing. It’s of the time but it’s progressive. It was real. It was organic and full of integrity.”