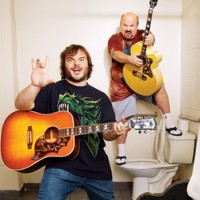 The acoustic joke-metal duo toured Australia with Foo Fighters late last year and now they prepare for their third album Rize Of The Fenix.

In a bitter teaser for the new album, Black claims that critics wrote them off following their last album/film The Pick Of Destiny but they are ready to “rize” again.

You can hear the song’s intro below on SoundCloud but it works a lot better alongside the little animation at their Rize Of The Fenix page here.

Rumour has it that the album will be released in May.

Radiohead guitarist Ed O'Brien has revealed Brasil - a solo piece under the name EOB - to accompany a nine-minute short film.

Back in 2009, Gary Moore played an intimate gig to a few hundred fans in London. Now that show is finally going to see the light of day.

With the Christmas season over, it allows regular albums to reclaim the charts, and this week the self-titled fifth album for Beyonce climbs back up two places to give her the first ARIA No.1 album of her career.

New U2 Coming Sooner Or Later

A new U2 album could be with or without you in 2013, then again maybe not. Bono says the band has been working on a follow-up to 2009’s ‘No Line On The Horizon’ but doesn’t care if it takes 10 years to produce.