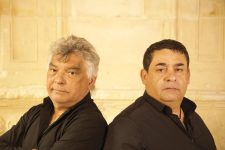 The Gipsy Kings, with original members Nicolas Reyes and Tonino Baliardo, will perform Bluesfest sideshows across Australia in April.

The French band based around Spanish musical influences features vocals by founding member Nicolas Reyes, who is the son of flamenco star Jose Reyes. Tonino, Nicolas’ cousin, is the son of French guitarist Manitas de Plata. The lineage of Gipsy Kings go back to when the fathers performed as a duo and generated the genre Rumba Flamenca (Gypsy Rumba).

The Gipsy Kings had their first hit in Australia in 1989 with ‘Bamboleo’.