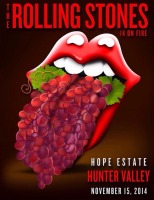 The Rolling Stones fans heading to this weekend’s Hunter Valley show may get to hear the show on the grapevine.

The custom designed Rolling Stones t-shirt and poster for the New South Wales wine region the Hunter Valley, features the Stones logo with the tongue made of red wine grapes.

Every Stones show in Australia has had a unique t-shirt and poster. Sydney had the surfie, Melbourne had a Skipping Girl Vinegar and a football design, Adelaide had the Adelaide Oval and Perth a Swan for show one and a sailboarder for show two.

Had the Hanging Rock show gone ahead last weekend the t-shirt was a country skyline with the Stones logo in stars.

18,600 tickets have been sold for Saturday’s Stones show at Hope Estate in the Hunter Valley.

Song voting is now also open for the show with the choices:

In his interview with Noise11.com last week The Rolling Stones musical director Chuck Leavell told us that voting for the shows in Australia has been the strongest ever with Melbourne registering around 50,000 votes.

Chuck, who puts the Rolling Stones setlist together with Mick Jagger for every show, said the band always play the most requested song. They do not cheat the vote.

Listen to the Chuck Leavell Noise11 interview on iHeartRadio 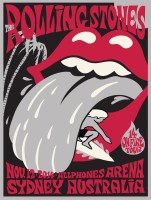 The next Rolling Stones show is Hunter Valley, November 15, 2014.

The Rolling Stones will tour Australia for Frontier Touring.

Red Hot Summer has just pushed ticket sales over the finish line for a 15th time for the Hunter Valley show in February.

The Rolling Stones Tick Off The Hunter, Brisbane You’re Next

The Rolling Stones are nearing the end of their Australian tour after playing in the Hunter Valley this weekend. The final Stones show will be next Tuesday in Brisbane.