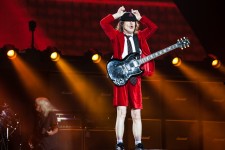 AC/DC’s long-awaited next album will be called PWR/UP and is set to roll out any time now.

AC/DC teased the new album this week when a poster appeared in Sydney outside Ashfield Boys High, the school Angus and Malcolm Young went to as kids.

The album was recorded in 2018 at Bryan Adams’ Warehouse Studios in Vancouver. AC/DC have recorded every one of their 21st century albums in the same studio with ‘Stiff Upper Lip’ released in 2000, ‘Black Ice’ in 2008 and ‘Rock or Bust’ in 2014.

‘PWR/UP’ is the second AC/DC album without co-founder Malcolm Young, who died in 2017.