Adele Confirms She Isn't Ready For A New Album - Noise11.com 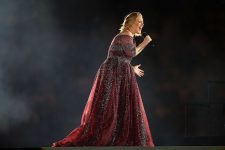 Adele hosted the sketch comedy show live from New York City, and recounted her first appearance on the show 12 years ago, calling it her “big break” in the United States, during her monologue.

“My album is not yet finished… I’d rather put on some wigs, have a glass of wine or six and just see what happens,” laughed the hitmaker.

Adele also addressed her incredible weight loss, quipping: “I know I look really really different since you last saw me but, actually, because of all the Covid restrictions and the travel bans, I had to travel light and I could only bring half of me, and this is the half I chose.”

Elsewhere in the show, the 32-year-old played herself competing in a The Bachelor-themed sketch, during which she randomly started breaking out in songs, singing her hits including When We Were Young and Hello.

“You may know me as the singer Adele. I’m here because I’ve had a lot of heartbreak in my life,” she went on.

“First at 19, and then sort of famously at 21. And then even more famously at 25,” Adele jested, referencing the numerical titles of her first three albums.