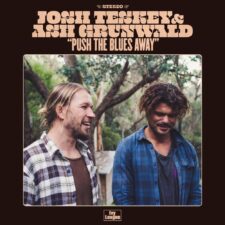 Ash Grunwald and Josh Teskey Drill Down To Blues Purity

When Josh Teskey and Ash Grunwald collaborated for ‘Push The Blues Away’ the concept was to bypass the “middle men” and make an album of as close to authentic blues they could possibly muster.

“I like to sometimes cut out the middle man,’ Ash Grunwald tells Noise11.com. “When you are getting to a genre like Blues, I have a great appreciation for the things that came inbetween like The Rolling Stones and later Stevie Ray Vaughan and Hendrix. I love those guys like Buddy Guy bit sometimes it is good to go back to Robert Johnson, Bukka White, Howlin’ Wolf, where it is in its purest form. Its like getting something before it gets watered down”.

The Stones, The Beatles, even AC/DC were influenced by the Blues. When they cite influences, they talk up where Ash and Josh have conjured up for ‘Push The Blues Away’. “There is something about getting that real purity,” Ash says. “We wanted to make an album like this. We are in these times now where it is hard to know what the truth is. Social Media, a whole lot of crazy stuff. To have some purity, something really simple, something from the heart, now is the time for that kind of thing”.

“Acousticy, bluesy stuff is the genuine article. One of the songs on the album ‘Something With Feel’, I wrote that with that concept.” Ash says.

‘Push The Blues Away’ is out now.

<a href=”https://www.facebook.com/Noise11dotcom/”>Comment on the news of the day, join Noise11 on Facebook</a>