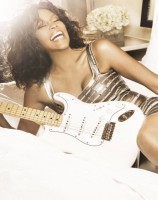 Whitney Houston’s ex-husband Bobby Brown has been officially invited to attend her funeral in New Jersey on Saturday.

Whitney’s family has earlier suggested that Brown was unwelcome at the service but have now decided to allow Bobby to attend to “keep the peace”.

Brown had said that he was going to go to the funeral whether he was welcome or not.

Whitney’s funeral will be held on Saturday in her hometown on Newark, New Jersey at the New Hope Baptist Church. Aretha Franklin, Kevin Costner, Stevie Wonder, Clive Davis and Alicia Keyes will attend.

Whitney will be buried in a family plot next to her father at the Fairview Cemetery in Westfield, New Jersey.

Prince's extraordinary career is going to be celebrated in a mammoth all-star gig featuring a load of artists from all corners of the musical spectrum.

Alicia Keys has been tapped as the face of Stella McCartney's new breast cancer awareness campaign.

Charlie Puth Has Recorded A Song With Alicia Keys

Alicia Keys reflected on her vulnerabilities when she was writing music for her new album.