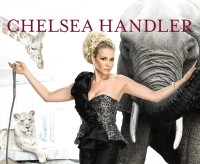 Comedian Chelsea Handler will perform in Sydney, Brisbane, Perth and Melbourne in November.

Chelsea is the star of the late night talk show Chelsea Lately, an actor, author, TV host, writer and producer.

The tour will be the first time for Chelsea Handler has performed live in Australia. Australia will pick up the tour immediately after a 37 date run in the USA.