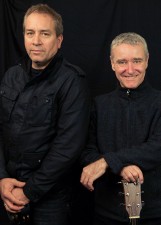 “Dale has resigned effective March last year”, drummer Peter ‘Maz’ Maslen tells Noise11.com but the band kept it quiet until now. “We did our last gig with him in November in Canberra. There is no acrimony and we are all still friends”.

Maz says Ryder was all for the band continuing with a new singer. “Dale gave his blessing for us to find a replacement,” he said. “Put simply, he has a different MO than the rest of us”.

The remaining members did debate if they should continue. “We struggled with the idea, but the impetus to go on and still be a recording artist, was stronger than merely being a heritage act (not that there’s anything wrong with that)” Maz said. “We approached a few singers with an ‘expression of interest’ and Andy was keen and fitted the mould”.

Peter Farnan and Richard Pleasance formed Boom Crash Opera in 1985 with Dale Ryder on vocals, Maz on drums and Greg O’Connor on keyboards. Tilso joined in 1992 replacing Pleasance who left the band because of tinnitus caused by his constant exposure to loud music.

With Andrew in the band there is now a very real possibility that Boom Crash Opera will record new music and possibly, just possibly, release their first album since 1997’s ‘Gizmo Mantra’.

De Silva is now rehearsing with the band. Except live dates soon.

Melbourne maestro, Music Director John Foreman will pair some of the Australia’s greatest vocalists with a 30-piece orchestra to perform the music of George Michael in October for ‘George Michael: Listen To Your Heart’.

Andrew De Silva is out to take the “hardest working man in showbiz” award in coming months. He will tour with his band CDB for their own shows and with Keith Sweat, he has his Prince tribute shows and he will also be out with Boom Crash Opera.

Boom Crash Opera will set out for their first tour with new singer Andrew De Silva starting Friday in Albury.