Flight Of The Conchords To Tour Australia In July - Noise11.com 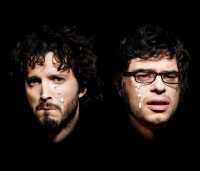 Flight Of The Conchords To Tour Australia In July

Beloved Kiwi comedy duo Flight Of The Conchords will visit Australia for their first headline tour in July.

Bret and Jemaine are set to bring their deadpan banter and hilarious folk-rap tunes to our shores, Jemaine saying in a statement, “We are finally returning to Australia. Mostly to apologise.”

While their cult comedy series and albums launched them into the public consciousness, the boys have gone one step further in 2012. Bret beat out Jemaine to win an Oscar for his ‘Man Or Muppet’ song from The Muppets (Jemaine’s Rio song was the only other tune nominated).

Since they’ve gone Hollywood, this might well be a rare chance to catch them live on stage.

Frontier pre-sale tickets will be available from 4pm this Thursday. The general public can grab tickets on Tuesday 17 April, from Ticketek for Newcastle, Brisbane, Wollongong, and Adelaide, Ticketmaster for Melbourne and Perth, and from the Opera House website for Sydney.

Grime Superstar Stormzy is making a huge return to Australia in May 2020.

Violent Soho Are Back With A New Single

If you have missed Violent Soho's unashamedly-influenced-by-the-90s guitar pop-rock, don't fret! They're back with an exciting new tune.

ARIA Midweek Report: Delta And Gurrumul Could Be No 1

A week after the reconciliation week, and week in which we lost his former band mate from Yothu Yindi; Geoffrey Gurrumul and Delta Goodrem’s rendition of his song “Bayini” could be headed for a No.1 debut this week in Australia.