Harry Shearer Creates Comedy Gold With The Many Moods Of Donald Trump - Noise11.com 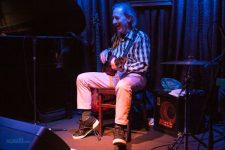 Donald Trump has been the Godsend of comedy writers. For the past four years people like Stephen Colbert, Seth Meyers and Jimmy Kimmel have dominated their shows with Trumpisms. Now Harry Shearer has as well.

Harry Shearer, the voice of Mr Burns, Waylon Smithers and Ned Flanders in The Simpsons, Derek from Spinal Tap and Handsome Dan in Wayne’s World, has just released the album ‘The Many Moods of Donald Trump’, a collection of pisstakes about the US President.

“The first song on the record ‘I Can’t Believe Its Me’ is a song about him riding down the escalator to announce his candidacy,” Harry Shearer tells Noise11.com. “I do a radio show every week in the States on public radio. I make fun of the news and he is a guy who demands that we pay attention to him every single freaking day. I’ve written a song or comedy sketch about him every single week about him. A lot of comedy sketches about him or his aides in a show called The Appresidentice”.

Harry has been releasing a song a week and has now also made a music video. “On this new video from the record called ‘Executive Time’, which depicts what Trump is doing during these huge gobs of day that are only described as “executive time”, there are no meetings with anyone or no official business going on, what I had him doing is sitting at his desk practicing his signature like you did when you were eight years old. When he was trying to prove he had recovered from Covid they had him signing blank sheets of paper like you did when you were eight years old”.