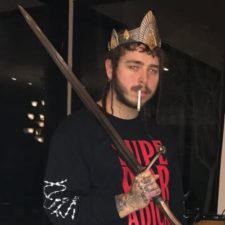 Post Malone has added Jaden Smith and Tyla Yaweh to his Australian shows starting this month in Perth.

Smith is the son of actor Will Smith. He starred with his father in the 2006 movie ‘The Pursuit of Happiness’ and with dad again in After Earth in 2013.

Jaden was also in the remakes of The Day The Earth Stood Still and The Karate Kid.

In 2017 he released his debut album ‘Syre: The Electric Album’.