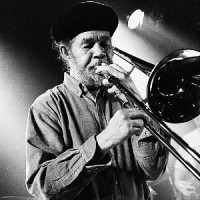 Rico Rodriguez, who died on Friday at the age of 80, may be best known for his time with The Specials, but he spent much longer with Jools Holland’s Rhythm and Blues Orchestra which he was with from 1986 to 2012.

Holland has paid tribute to Rodriguez on his official webpage:

September 4th: A tribute to Rico Rodriguez who died today

I first met and worked with Rico Rodriguez in the early 1980s; I was introduced to him by Kirsty McColl. I immediately became a fan. From the 1990s until only quite recently he was a regular member and one of the stars of my orchestra, until his health made it impossible for him to continue playing. He was an originator and a unique person in 20th Century music.

He bridged the gap between early Jamaican music and modern British ska pop music. As a man he was my friend and a great friend. I toured the world with him and spent as much time enjoying his company as his music. He had a great knowledge on many subjects from the Old Testament to horseracing; his personality and sound were as one and both adorable.

I know I speak for my whole band when I say I will miss him both as a friend and as a fellow musician. – Jools Holland

Jools Holland will return with an all-star female cast including Kylie Minogue and Amy Winehouse for his new album 'Sirens of Soul'.

This past summer, Bobby Womack released his first album of original material in eighteen years.

Chas’n’Dave Go Back Out On The Road

They pioneered the 'Rockney' genre with their blend of memorable songs, music-hall humour, and Rock'n'Roll.

Gary Barlow has been announced as the host of Queen Elizabeth II’s Jubilee Concert at Buckingham Palace next week.

Sir Paul McCartney has married for the third time.