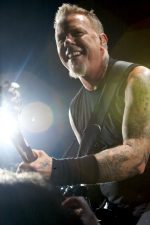 Metallica – comprising James Hetfield, Kirk Hammett, Robert Trujillo and Lars Ulrich – joined forces with Lady Gaga for a performance of their track ‘Moth Into Flame’ at the 2017 Grammys.

And their frontman was in awe of her dedication to the performance and her creative vision. Hetfield told ‘The Howard Stern Show’: “I just respect her as an artist.

“She was there for two hours before we even got there, working on her moves and thinking stuff up. She is extremely creative and a fearless artist.”

Drummer Ulrich, meanwhile, recalled how Gaga is a major metal fan and loves a “deep cut” from their iconic 1983 debut record, ‘Kill ‘Em All’.

He added: “Lady Gaga, in particular, she loves metal. She was telling me that ‘Metal Militia,’ which is this deep cut on our first album ‘Kill ‘Em All’, was her favourite song back in the day.”

Elsewhere, the Grammy-winners opened up about their upcoming concert they are airing at drive-in theatres across North America.

Like most bands, they’ve had to reschedule and postpone shows amid the coronavirus pandemic.

And they are set to perform their first show in almost a year, which will be screened on August 29 as part of Encore’s Drive-In Nights series.

Ulrich described it as an “experiment” to see how they can engage with fans while concerts are off.

He said: “I guess I can let the cat out of the bag here. Yesterday, we recorded a special hour-and-forty-five-minute set that’s coming to [300 drive-ins]. It’s an experiment to see what other cool new ways we can connect and bring music to fans all over the country.”

And Hetfield added: “Selfishly, it’s really for us to get together and jam — because we miss jamming — and then hopefully bring some joy to people … and they can be safe in their car.”

Another Safechuck Michael Jackson Case Thrown Out Of Court

A new lawsuit filed by James Safechuck, who accuses Michael Jackson of child abuse, has been dismissed.

Tony Lewis, singer for The Outfield, has died at age 62.