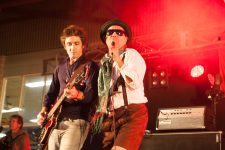 What started off as a one-night stand has developed into 40 years for Painters & Dockers.

“I didn’t think we were going to make it to that year,” Paulie Stewart tells Noise11.com. “We were going to do one gig to pay for Billy Walsh’s parking fines. That’s all it was going to be. Now nearly 40 years we are still playing”.

Painters & Dockers started in 1982, at a very interested time in Melbourne and around the time of Hunters & Collectors, Nick Cave and, that very same year, TISM. “We have a real interesting history with TISM,” Paulie says. “At one of their first gigs they were reviewed and the guy said “this band is shithouse. They are like the Painters and Dockers in masks”. From that moment forward people assumed we were in TISM or that the two bands were the same. For the last 30 years. I’ve said no, we were a different band but now I just say we the same band.”

The TISM/Painters & Dockers has another crossroads. “My mum was a teacher at Camberwell High School,” Paulie says. “Another teacher there was Terri Rowe. My mum came home and said “this girl Terri, her husband is in a band and they want you to listen to a cassette to see what you reckon”. I asked what it was called and she said ‘Defecate on my Face’. I thought these guys were hilarious. I gave it to our management at the time. Michael Lynch ended up managing TISM and we did a lot of gigs with them”.

It wasn’t hard for Paulie to name the most creative Melbourne band at the time. “I Spit On Your Gravy,” he says. “They had a song called ‘If You Can’t Take A Joke So Fuck You Then’. A lot of people cite The Saints or Radio Birdman. For me it was Fred Negro and I Spit On Your Gravy. He was a huge influence. Melbourne in the 1980s, everyone was Nick Cave and The Birthday Party. Everyone was dark and gloomy. Then there us, I Spit On Your Gravy, Huxton Creepers and Cosmic Psychos’.

Painters & Dockers live album You Know You Want It is available from their website.