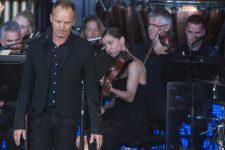 Sting has been honoured for his environmental activism by Prince Albert II of Monaco at a star-studded gala event.

Guest of honour was Sting – who was recognised for his work with the Rainforest Foundation he founded with his wife Trudi Styler, joining previous honourees including Leonardo DiCaprio, Orlando Bloom, and Robert Redford.

According to The Hollywood Reporter, Prince Albert said they had considered abandoning plans to hold the event, held on the terraces of the Opera de Monte-Carlo, but decided to go ahead with strict safety protocols in place.

“We gave much thought as to whether to hold this event or not, given the prominence of ongoing concerns and health issues,” he explained. “However, the commitment of all the individuals involved in protecting our planet and of all of you…led us to make this decision. And we did so because the challenging situation in which we are living (it is) best not erase the environmental crisis.

“Our health depends on the health of the environment in which we live. That is why more than ever before we need to continue our efforts and actions to protect our planet for future generations.”

Helen Mirren acted as Master of Ceremonies at the bash, with Leona Lewis, Maisie Williams, and Tommy Hilfiger also in attendance.

An auction of items and experiences, including a private dinner with Prince Albert, a doubles tennis match with Novak Djokovic and the Prince, a rare Aston Martin V8 Vantage car, a day on the set of Garcia’s next film, and artworks by Bansky, Roberto Matta, and Joan Miro was also held to raise funds for the Monegasque royal’s environmental charity.