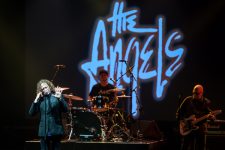 “We are very excited to have re-recorded Darkroom with Dave Gleeson, Sam and Nick, Darkroom has always been a very special album for us, marking the time when we left Alberts and toured America and Europe. It completes the Face to Face/No Exit/Darkroom Trilogy, recorded both in the Studio and Live, with bonus tracks and the occasional change from the original recordings. And we’re finally taking it out on tour in 2021. Can’t wait to change the rusty strings, shake off the Cabin Fever and hit the road again!”

‘Dark Room’ was the fourth album for The Angels. The album was recorded in Sydney and self-produced. It featured the hit song ‘No Sscrets’.

John Brewster said “The Angels have a long history that we can be proud of, as we are every member that’s played in the band over the years. These days we continue to write and record new songs, and with Dave Gleeson, Sam Brewster and Nick Norton it’s great to revisit the Darkroom album, one of my favourites.”

The Angels plan on hitting the road again in 2012. get tickets at https://theangels.com.au