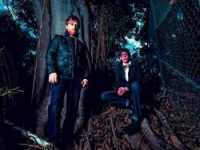 The second track to emerge from the sessions of the Grammy-winning Ohio blues-rockers’ forthcoming album El Camino is titled ‘Run Right Back’.

It’ll be released as a vinyl exclusive for Record Store Day, as a b-side to the first single from El Camino that emerged recently, called ‘Lonely Boy’.

Both songs will be on the album, which comes out on December 6 but you can get them early on the 12-inch record on Record Store Day, November 25.

And as a taster, Zane Lowe gave ‘Run Right Back’ an airing on UK’s BBC Radio 6, and the radio rip has been added the Listen Before You Buy as a stream.

Check out the song and the cover art for the 12-inch here.