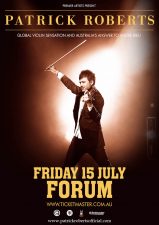 Internationally acclaimed Australian violinist will return home to Melbourne to perform at The Forum.

Roberts, from Greensborough via Yallambie, has been called ‘Australia’s Andre Rieu’.

Patrick Roberts was a musical prodigy playing songs at age five from memory and by 11 performing at concerts.

As a teenager Patrick sang for four years for the National Boys Choir where shortly after he studied at the Melbourne Conservatorium of Music Later he went on to teach and lecture ‘Violin Technique and Performance’ at the Conservatorium.

Recently Patrick recorded ‘Visions’, an album to raise funds for Vision Australia to help the blind and vision impaired. He has also performed to aid The National Stroke Foundation, The Cancer Council, The Royal Children’s Hospital and Vision Australia.

Patrick’s show at The Forum is somewhat of a homecoming. Patrick plans to include “You Raise Me Up”, “I Dreamed a Dream”, “Concierto De Aranjuez” and the all time classic “My Way”, all songs included on his various albums, at the performance on July 15.

Tickets for Patrick Roberts at The Forum are available through Ticketmaster.

Violinist Patrick Roberts has finished recording his new song ‘Legacy’ and is preparing to debut the song live in his hometown Melbourne at the Forum in July.

The Rolling Stones will play their first show since Auckland last November tonight with a club show in LA.

The Foo Fighters have performed their very first show of 2015 with an all-star cast including Alice Cooper, Paul Stanley of Kiss, David Lee Roth, Lemmy from Motorhead Tenacious D and Zakk Wylde at The Forum in Los Angeles.

Elbow don’t have fans, they have worshippers. Melbourne’s Forum Theatre was turned into the Church of Elbow on Wednesday night when the Manchester band performed to a mesmerized audience.

Chet Faker has postponed his show tonight in Melbourne due to illness.

Eagles have officially been the first act to play at the iconic Forum reopening in Los Angeles.

Eagles can now rightfully claim their classic ‘Hotel California’ to be the biggest album of all-time … literally.