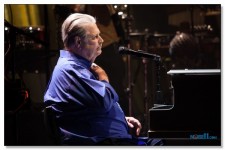 Brian Wilson has said that this will be his last time performing the Beach Boys’ classic album Pet Sounds, but he keeps putting that end off.

Called the second greatest album ever made by Rolling Stone, behind the Beatles’ Sgt. Pepper, Wilson has been traveling around the world over the last year with a show that sees Brian, Al Jardine, Blondie Champlin and his regular band play a number of Beach Boys’ classics followed by a complete run through of Pet Sounds and an encore of more group hits. In 2016, they did the show 99 times.

Wilson said “There were so many cities on this great tour that myself, my band, Al, and Blondie just couldn’t get to playing. We’re performing more shows than ever before and the fans keep asking for more! It’s been a real trip so far and I’m happy that we’ll have the chance to reach so many people that weren’t able to catch our shows this year.”