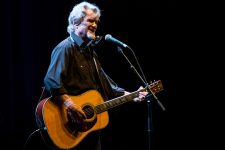 Barbra Streisand and Kris Kristofferson performed their ‘A Star Is Born’ duet ‘The Love Inside’ live for the first time ever at London’s Hyde Park on Sunday night (07.07.19).

The surprise performance came over four decades after Barbra, 77, and Kris, 83 – who had performed his own set earlier in the day – starred in the 1976 version of the musical drama, which was adapted last year with Lady Gaga and Bradley Cooper in the leading roles.

As Barbra and Kris – who portrayed Esther Hoffman Howard and John Norman Howard respectively in the movie – walked on stage, the music legend asked her leading man: “Can we sing like that again?”

If that wasn’t enough of a treat for fans, Barbra – who drew in a star-studded crowd including A-listers Antonio Banderas, Richard E. Grant and Ralph Fiennes – brought out special guest Lionel Richie for their first live performance of ‘The Way We Were’, which they recorded for her 2014 duets LP ‘Partners’.

The ‘All Night Long’ hitmaker – who had performed with Stevie Wonder the night before at Hyde Park – admitted it was a mission to sneak into the festival and keep the secret appearance under wraps and that he was ticking off one his biggest dreams by getting to perform with Barbra.

Before the stunning duet, Lionel asked where the ‘Don’t Rain On My Parade’ hitmaker’s dogs were, and the animal-mad star later had her pets Miss Scarlet and Miss Violet – who she had cloned from her beloved pooch Samantha, a fluffy white Coton de Tulear breed, before she died in 2017 – brought out on stage to be introduced to the 65,000 people in the crowd.

Barbra admitted she wasn’t sure if the dogs were down with “show business”, before they were escorted behind stage after a brief visit to their mother.

Barbra had kicked off her dazzling set with a humorous rendition of ‘As If We Never Said Goodbye’, in which she paid homage to her favourite things about the UK, including The Duchess of Sussex, clotted cream and Cornish pasties.

And she even took regular intervals to sip some English Breakfast tea from a china teapot and cup and saucer placed on a table with a rose in a vase.

The Hollywood icon also quipped that she didn’t attend the Pride event in the capital this weekend, as she knew many of her LGBTQ+ fans would be in the audience.

She smiled: “On the way here, the driver asked me if I’d gone to any of the Pride celebrations.

“And I said why would I? I knew they’d be here tonight!

“I believe everyone has the right to love everyone whoever they choose.”

BST Hyde Park is still set to see shows from the likes of Florence + The Machine, Robbie Williams and Bob Dylan.

This year sees the return of All Out Beauty, a cool area to watch the artists perform and get festival-ready with complimentary glitter, hair styling, nail art and eye and lip treatments.

For the full line-up head to www.bst-hydepark.com and for more information on All Out Beauty check out their Instagram page @AllOutBeautyUK.