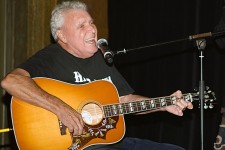 Max was born in Christchurch, New Zealand in 1941. After relocating to Sydney in 1964 he formed Max Merritt and the Meteors. Their first Australian television appearance was for Johnny O’Keefe’s ‘Song Sing Sing’ performing the 1946 Disney song ‘Zip-A-Dee-Doo-Dah’.

In February 1966, Max Merritt and the Meteors were the support act for The Rolling Stones.

Merritt had the hit in Australia with ‘Try A Little Tenderness’, not Otis Redding.

The band also had the Australian hit with a cover of ‘Western Union Man’.

However it was Max’s original ‘Slipping Away’ that became his biggest hit. The song reached no 2 in Australia and no 5 in New Zealand.

Max Merritt relocated to the USA in 1977.

In 2007 he was suffering kidney failure and diagnosed with Hood Pasture Syndrome, a rare auto-immune disorder. in 2008 he was inducted into the ARIA Hall of Fame.

Max died in a Los Angeles hospital after his battle with Goodpasture Syndrome.