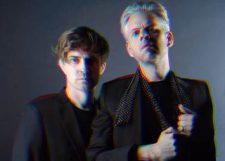 In a statement Nick Littlemore says, “The reason we started Lab78 was because we were meeting these very special people, these beings. Peter and I wanted to bring them into our fold so we may make the records that we felt not only did the artist desire or deserve, but the world deserved, and use our expertise, with the help of these wonderful artists like Alister Wright, like Ivy who you are yet to meet, and bring them out to the world.”

Blue Mountains artist Alister Wright is Vlossom. He was previously in Cloud Control. “Alister is a pretty open-minded guy, like me, and thus we’ve both explored some pretty interesting headspaces,” Nick says. “Often times he’ll sing something that just once, but I can see a sea of people in a festival echoing back. Those kind of moments, they demand repetition. Everyone feels the undeniable, where we all feel the love of another, that kinship. Each listen deepens the experience. He sung a world into existence and now it’s time for me to chart it, like a cartographer.”

The first release on Lab78, Vlossom’s debut single ‘Catch Your Breath’ will be released on Friday, November 15th.