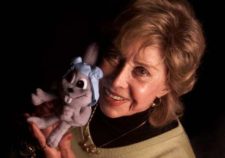 June Foray, the voices for Rocky J. Squirrel and Nastasha in Rocky & Bullwinkle, has died at the age of 99.

June was just two months short of her 100th birthday when she passed away at her home in Los Angeles on 26 July.

June Foray began her career on radio in 1937 working on the series ‘Lady Make Believe’ and then later writing episodes.

June was the original Betty Rubble in the shows pilot, Mother Magoo in Mister Magoo, Granny and Witch Hazel in The Bugs Bunny Show, Krazy Kat and Mrs Kwak Kwak in Krazy Kat.

She also made the occasional sitcom appearance in Get Smart, Bewitched, Green Acres and The Brady Bunch.

In recent years June made a cameo as Rocky in a 2001 episode of Family Guy. She was in The Powerpuff Girls, Duck Dodgers, and from 2011-2014 played Granny in The Looney Tunes Show.

Hollywood has honored June Foray with her own star on the Hollywood Walk of Fame.

Sir Sean Connery, the first actor to play James Bond in film, has died at age 90.

Russi Taylor, who since 1986 was the voice of Disney’s Mickey Mouse and also the voice of The Simpsons’ Martin Prince, has died at the age of 75.

Actor Rip Torn, who played opposite David Bowie in ‘The Man Who Fell To Earth’, has died at his home in Connecticut at the age of 88.

Renee Zellweger is making her full solo album debut with a collection of Judy Garland songs she recorded for her new movie about The Wizard of Oz star.

Burt Reynolds, the iconic American actor who starred in ‘Smokey and the Bandit’, ‘Deliverance’ and ‘Boogie Nights’, has died at the age of 82 from a heart attack.

One of American’s greatest character actors Harry Dean Stanton has died at the age of 91.

Actor and radio star Jay Thomas has died after a battle with cancer at the age of 69.