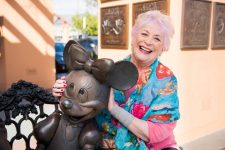 Russi Taylor, who since 1986 was the voice of Disney’s Mickey Mouse and also the voice of The Simpsons’ Martin Prince, has died at the age of 75.

Russi was married to Wayne Allwine, who was the voice of Mickey Mouse from 1991 until his death in 2009, so Mickey and Minnie really were married.

We are sorry to report that Disney Legend Russi Taylor has passed away: https://t.co/8uphuNZy3i pic.twitter.com/FwAdJJYpqw

Russi voiced Martin Prince from season 3 until present. She has also been the voice of Pebbles Flintstone, young Donald Duck, Strawberry Shortcake and Dolly in the Little Rascals.

.@TheSimpsons Deeply saddened to learn of the passing of Russi Taylor a true delight to work with. pic.twitter.com/1qNUf7M6TM

Sir Sean Connery, the first actor to play James Bond in film, has died at age 90.

Actor Rip Torn, who played opposite David Bowie in ‘The Man Who Fell To Earth’, has died at his home in Connecticut at the age of 88.

Renee Zellweger is making her full solo album debut with a collection of Judy Garland songs she recorded for her new movie about The Wizard of Oz star.

Burt Reynolds, the iconic American actor who starred in ‘Smokey and the Bandit’, ‘Deliverance’ and ‘Boogie Nights’, has died at the age of 82 from a heart attack.

One of American’s greatest character actors Harry Dean Stanton has died at the age of 91.

Actor and radio star Jay Thomas has died after a battle with cancer at the age of 69.

June Foray, the voices for Rocky J. Squirrel and Nastasha in Rocky & Bullwinkle, has died at the age of 99.