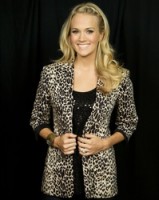 Carrie Underwood, Shania Twain and Snoop Dogg are among the stars to have landed their own radio shows on the revamped Apple Music network.

Shaniaand Snoop Dogg have been recruited for their own Apple Music Hits shows, alongside artists including Ciara, Meghan Trainor, the Backstreet Boys, and Alanis Morissette, while Carrie is joined on the country station by Luke Bryan, Dierks Bentley, Kelsea Ballerini, Luke Combs, Florida Georgia Line, and This Is Us actress-turned-singer Chrissy Metz.

James Blake On His New Project ‘Before’

James Blake has posted a teaser for his upcoming EP on his Instagram Story, while he also added a UK and US phone number to his bio on the photo-sharing site, which sends the caller to the website beforeep.com, where a countdown timer ending on Wednesday (14.10.10) can be found.

Lady Gaga is set to front her own weekly radio show for Apple Music.

James Blake joined Zane Lowe on Apple Music to discuss his new song “Are You Even Real?”, co-written with Starrah and Ali Tamposi.

After 18 years of faithful service iTunes is set to retire.