The Best Bits Of Kanye West On Jimmy Kimmel - Noise11.com 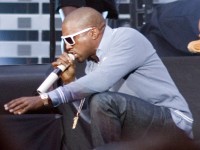 The Best Bits Of Kanye West On Jimmy Kimmel

Following an intense Twitter feud that erupted between the rapper and the TV show host, Jimmy Kimmel invited Kanye West onto his late night talk show to clear the air. As always when it comes to ‘Yeezy’, hilarity ensued.

Although the purpose of the interview was to clear the air between them following the feud, it was obvious that Kimmel was attempting to get a rise out of West from the moment he introduced him,

“My guest tonight is a twenty-one time Grammy awards winning performer, who last month threatened his very existence by insulting one of America’s most beloved television personalities,” he baited.

The conversation mostly revolved around how Kimmel had taken some of Kanye’s remarks on BBC Radio out of context when he screened a skit involving children reenacting the interview.

As a way to try and explain himself Kimmel said, “I’ll be honest with you, I only saw a couple of little parts of the interview before we did this sketch.”

Kimmel then went on to explain that they had perhaps taken the interview out of context in the name of comedy, and that “the main reason that I did that is that I like to see kids curse,” Kimmel stated.

Trying to convince us that their feud was not a ‘publicity stunt’, Kanye explained, “I have never done a publicity stunt in my life,” likening celebrities to “Zoo animals,” who are constantly poked and prodded until they snap, seemingly pointing the finger directly at Kimmel.

“A lot of times I think you bring it on yourself, this misunderstanding about you, I don’t know if you know this but a lot of people think you’re a jerk,” Kimmel replied.

This was perhaps the most awkward moment in the interview. Kanye just sat, stone faced, and the world held their breath hoping for one of his infamous tirades. But, after Kimmel smoothed things over, everything was cool between the two, but there was still ample time for one of Kanye’s rants directed at the rest of the world.

It is worth noting that Kanye was (on the most part) actually quite articulate and forthcoming in his answers. But the interview was not without a few Kanyisms.

On the fact that he often calls himself a “creative genius” and how that might rub people up the wrong way, Kanye declared, “to say I wasn’t a genius, I would be lying to you and myself.”

On the refusal by the people in charge of Hollywood’s Walk of Fame to allow Kim Kardashian a ‘star’ because she is a reality star, “there’s no way that KIM KARDASHIAN shouldn’t have a star on the walk of fame,” seemingly suggesting that she is just as deserving of the star as icons such as Marilyn Monroe and Helen Mirren.

On fashion, Kanye asks, “who do you know who is known more for clothes than me?” Um, maybe Giorgio Armani, Alexander McQueen, Yves Saint Laurent, Ralph Lauren or the countless other designers that you tend to put on yourself daily?

Finally, on the classism divide that is growing in the US, especially when it comes to the ‘cult of celebrity’, he explained that it’s no longer a racism issue, but rather “it’s all about truth, it’s about information, it’s about awesomeness.”

To be honest, I’m all about ‘awesomeness’ too, but I’m not sure what this has to do with class division.

Whether you love him or hate him, you can’t deny Kanye’s entertainment value. Be honest, who wouldn’t want to be Kanye for a day? You would get to experience the bliss of being completely up yourself, clueless and an all-round genius.

You would also have the chance to be brutally and unashamedly honest in why people should love and respect you, “I’m just gonna give y’all the truth and y’all gonna learn to love it.”

So it turns out we have no say in the matter. We will all love, love-to-hate or be entertained by Kanye at some point. Accept ‘Yeezus’ into your heart and you will be entertained in this life and in the next. Amen.

Billie Eilish Comes Out On Top After Not Knowing Van Halen

Kanye West's feud with Jimmy Kimmel seems to be well and truly over, as the rapper has agreed to appear on his talk show on Thursday.

The Weeknd Cancels Kimmel Because of Trump

The Weeknd and rapper Belly cancelled an appearance on Jimmy Kimmel Live! because Donald Trump was booked on the same show.

Pink became hot and flustered when Johnny Depp showed up to surprise her during a live TV interview.

Miley Cyrus has dressed up as an Australian reporter for the Jimmy Kimmel show and while putting on a totally misguided accent that bordered more towards British, she did manage to fool most Americans.

Chicago and Earth, Wind & Fire are once again going on the road together this summer and, to promote the trek, made an appearance on Thursday night on Jimmy Kimmel.