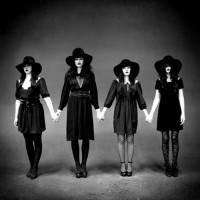 The first, ‘What Can I Do’, became the theme to Elvira’s Movie Macabre TV show and the second, ‘Charlene 11’, saw them as the backing band for master satirist Stephen Colbert.

Single number one from their self-titled debut is ‘Honky Tonk Horror’, featuring the ghoulish gals in their full, grave-robbing, garage glory.

Check out a preview below. The album will be out on December 2.