The Seekers To Release Volume 2 of Hidden Treasures - Noise11.com 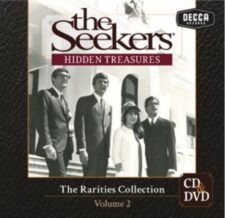 Volume 2 comes with an additional DVD with footage from The Seekers 1967 headline performance at Pop Goes Australia concert series at the Expo Theatre in Montreal, Canada.

The Seekers ‘Hidden Treasure Volume 2’ will be released on 30 October 2020.