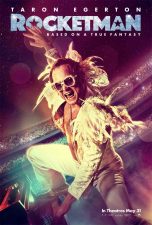 The new trailer for Elton John’s biopic ‘Rocketman’ comes with the profound advice “you’ve got to kill the person you were born to be to become the person you want to be”. Those were the rules that transformed geeky kid Reginald Dwight into superstar Elton John.

‘Rocketman’ is being directed by Dexter Fletcher who also directed Queen’s ‘Bohemian Rhapsody’ into total unreality.

‘Bohemian Rhapsody’ took so much poetic license with its storyline that the timeline was all over the place (Brian May was teaching the band ‘We Will Rock You’ three years after it was released; Freddie was diagnosed with AIDS before Live Aid when the truth was it was three years later; the movie made out the band had broken up just before Live Aid. In reality they were on The Works world tour. The movie ignored the last 6 years and three albums of Queen).

‘Rocketman’ will premiere in May. Lets just hope Fletcher hasn’t fucked up this story as well.