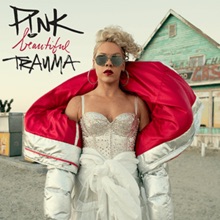 Australian Charts: Pink Beautiful Trauma Debuts At No 1 With 78000 Sales

The seventh studio album by PInk entitled “Beautiful Trauma” becomes her fifth No.1 album on the ARIA Albums Chart this week (four studios and one Best of), and has sold so much in its first week that it’s been certified 2x▲Platinum straight away.

Excatly five years ago her sixth albm “The Truth About Love” was spending its fifth of ten broken weeks at No.1 and she scored her first No.1 here back in early October of 2006 with “I’m Not Dead”, whilst “Funhouse” (9 weeks from 3-Nov-2008) and her “Greatest Hits… So Far” (13 weeks from 22-Nov-2010) were her other chart-topping sets. Which gives her a total of 35 weeks at No.1 in Australia, leaving her stuck at No.8 on the list for ‘Accumulated Weeks at No.1: Albums’, with her next target at 38 weeks being Rod Stewart, plus Pink moves up to equal 17th on the list for ‘Most No.1 Albums’ alongside other acts with five #1’s here like Celine Dion, Silverchair, Powderfinger, Crowded House, Michael Buble, Coldplay, AC/DC, Hilltop Hoods, ON-J, Kasey Chambers and Neil Diamond, plus she remains at No.3 on the list for ‘Most Weeks at No.1: Albums; 2010’s’, with 24 weeks during this decade (her next target is Ed Sheeran’s 29 weeks).

Neil Diamond was the first person to have a ‘Beautiful’ titled album hit No.1 i nAustralia with “Beautiful Noise” in late July of 1976, and this new ‘Beautiful’ album becomes the fifth with that word in its title, whilst its the first to feature the word ‘Trauma’. The new No.1 for Pink also becomes the 285th by an American artist (Solo, duo or group) to hit the top here, and also the 122nd by a Female Artist (local or overseas) and the fifth for 2017 after Kasey Chambers, Lorde, Lana Del Rey and most recently Shania Twain.

With the No.1 digital selling single in the country in “Perfect” (#3 nationally this week) for Ed Sheeran his parent album “÷ (Divide)” climbs back up one spot to No.2, the week in which he broke one arm and injured another after a bike riding accident. Last weeks top two entries slip down two places each this week, with No.1 entrant “Like a Version Volume 13” down to No.3 and “The Secret Daughter: Season 2” TV Soundtrack by Jessica Mauboy sliding to No.4.

The second Top 10 debut this week occurs at No.5, “Lotta See Lice” for Courtney Barnett and Kurt Vile (lead singer with The War on Drugs), who initially jammed together, and then decided to record this album, and now are on tour together through October and November across America. The new set lands one place lower than Courtney’s debut set “Sometimes I Sit and Think…” (HP-4, late March 2015).

There are six current and former No.1’s within the Top 10 this week, with the chart-leader from three weeks ago in “Now” by Shania Twain dow one to No.6, followed by Macklemore and his “Gemini” (HP-3) set down one to No.7 and then the No.1 set from five weeks ago in The Foo Fighters’ “Concrete and Gold”, also down one to No.8 and newly certified ▲Platinum. Finally holding at its peak of No.10 is Post Malone and his debut set “Stoney”.

UP:
* The Midnight Oil tour “The Great Circle” is currently working its way around the country (Victoria starts in early November), their “Essential Oils” collection climbs five places to No.11.
* The Michael Hutchence two part documentary screened on Channel 7 on Monday and Tuesday night, which sees the INXS “Very Best of” leap up twenty-one spots to No.12.
* Eminem and his collection “Curtain Call: The Hits” is back up four places to No.27, the album was last this high back in late May of 2015, whilst his album “The Eminem Show” returns at No.97.
* Imagine Dragons’ “Evolve” climbs back up nine spots to land at No.30 this week.
* Pink’s last album “The Truth About Love” is back up eight spots to No.33, giving her three albums within the Top 40 this week.
* Holding at its No.34 peak for a third straight week is the Johnny Mathis “Sings the Great New American Songbook” collection.
* Justin Bieber’s four singles might have all fallen this week, but his last album “Purpose” is back up eleven places to No.40.
* The Chainsmokers are touring the country at the moment, and their album “Memories… Do Not Open” jumps back up seventeen places to land at No.54.
* The first of eight re-entries occurs at No.55 as the Michael Ball and Alfie Boe album “Together” returns, followed at No.56 by the recent Lana Del Rey album “Lust for Life” helped by a recent vinyl release, and the physical release for the Nine Inch Nails set “Add Violence” sees it return at No.65. Migos are back in at No.90 with their “Culture” set, followed by “Glory Days” for Little Mix (#92), Elton John’s “Rocket Man” collection (#94) and Nickelback with “Feed the Machine” at No.99.
* Guns N’ Roses “Greatest Hit” is back up twelve places to No.57, the Cold Chisel “Best of – All for You” is also up twelve spots to No.81, with both Fleetwood Mac collections rise, GH (91 to 86) and Very Best of (99 to 95).
* Sia and her last album “This is Acting” rises back up twenty-four places to land at No.63.
* Katy Perry stays another week as her “Witness” set is back up twenty-five places to No.72.

DOWN:
* The three albums leaving the Top 10 this week are The Killers with “Wonderful Wonderful” (HP-1×1, WI10-3) down seven to No.15, with two of last weeks debutees leaving in “Heaven Upside Down” (HP-4, WI10-1) by Marilyn Manson down sixteen to No.20 and the debut set for Liam Gallagher and “As You Were” (HP-9, WI10-1) dropping twenty-five places to land at No.36 this week.
* The Rick Price and Jack Jones album “California Dreaming is down sixteen to No.28.
* There’s a ten place drop to No.31 for the Elvis Presley “50 Greatest Hits” collection and his debut seasonal album from last week “Christmas with…” is back down eight to No.53.
* Lorde’s “Melodrama” descends seven places to No.39 after its certification last week.
* Best of sets dropping this week are by Tom Petty & the Heartbreakers (19 to 42), The Killers (28 to 43), Queen (50 to 58), The Wiggles (58 to 73), Michael Jackson (78 to 88) and Shania Twain (65 to 98).
* Demi Lovato drops fourteen spots to No.44 with her album “Tell Me You Love Me”.
* Michael Jackson’s “Scream” collection is down ten spots to No.46.
* Jack Johnson continues to drop, as “All the Light Above it Too” is this week down nine to No.47.
* Vance Joy’s debut album “Dream Your Life Away” drops down eleven to No.64, with other locals dropping in Anthony Callea (48 to 75) and the first “Secret Daughter” set for Jessica Mauboy (57 to 76).
* Dua Lipa’s self-titled album is down eleven to No.83.
* Alex Lahey’s debut set “I Love You Like a Brother” plummets sixty-nine spots to No.84.
* A new Calvin Harris track “Faking it” was released on Friday, and its parent album “Funk Wav Bounces Vol.1” drops down twenty-seven places this week to No.87.
* Lady Gaga and her “Joanne” album drop down thirty spots to No.91 this week.
* Mackelmore and Ryan Lewis with “The Heist” fall forty-one spots this week to No.100.
* Falling out of the Top 100 from last weeks Top 50 are albums by The Darkness (#17), August Burns Red (#46) and Benny Andersson (#49).

FURTHER NEW ENTRIES:
* #14 (LP#13) – Colors by Beck is an album of tracks he recorded between 2013 and 2017 and did not feature on any of his studio albums during that time, with this becoming his tenth albums chart entry in Australia and his sixth to make it into the Top 20.

* #19 (LP#5) – MassEducation by St. Vincent is only the second of her five albums to chart in Australia, with her fourth self-titled album making it to No.54 in early March of 2014, so this becomes her first Top 50 and Top 20 placing here.

* #49 (LP#11) – Mr. Davis by Gucci Mane is the first of the US rappers eleven albums to chart here in Australia, with this set having seen the single “Curve” hit No.93 a few months ago.

* #50 (Live#2) – Live at Pompeii by David Gilmour was filmed at the famous Pompeii Amphitheatre which hosted his former band Pink Floyd’s live concert in October of 1971, which was the first since the city was rediscovered after falling in the year 79AD. This new set features tracks from his last studio album “Rattle That Lock” (HP-2, late Sept 2015) and becomes his second live album to chart after “Live in Gdansk” (HP-30, October 2008).

* #51 (LP#2) – The Ooz by King Krule, who was born Archy Marshall in England, see him mix styles like hip-hop, trip-hop, punk jazz and darkwave into his sound, and this is his first chart entry here.

* #68 (LP#7) – The Saga Continues by Wu-Tang is the first album not to feature passed bandmate U-God, thus they have dropped the ‘Clan’ from their name, as they are no longer the clan-they-were, and this new set is the bands fifth albums chart entry and first since 2014’s “A Better Tomorrow” (HP-49, Dec 2014).

* #79 (LP#1) – Permament Vacation by Lime Cordiale are a local duo made up of brothers Oli and Louis Leimbach whose debut album features styles of rock, pop and soul, with the band touring around the country up until December.

* #80 (LP#44) – I Believe in You by Dolly Parton is the first kids album recorded by Dolly, with all proceeds going to her childrens ‘Imagination Library’, and features new renditions of her older songs like “Coat of Many Colours” amongst its fourteen tracks.