Australian Charts: The Killers 'Imploding The Mirage' Debuts at No 1 - Noise11.com 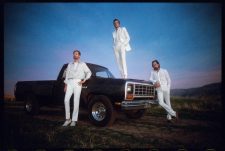 The Killers photo by Olivia Bee

The Killers see their sixth studio album called “Imploding the Mirage” become their third No.1 album in Australia this week, while the set also becomes their sixth consecutive #1 in England (a first for a non England based band).

The Killers first hit the top with their debut set “Hot Fuss” for one week in late February of 2005 (it first charted in August 2004 here), while their last set “Wonderful Wonderful” from Oct. of 2017 debuted and peaked at No.1 for one week, thus this third No.1 here becomes their third single week stay at the top too (so far). All of the band’s studio albums have reached No.4 or higher, plus they’ve also had two Top 10 compilations, which makes this new entry their eighth Top 10 album in Australia (6 studios and two comps).

This is the first time that both the words ‘Imploding’ or ‘Mirage’ have appeared in a No.1 album title, with Fleetwood Mac’s 1982 album “Mirage” peaking at No.2 being the closest previous highest placed ‘Mirage’ on the charts here. This new No.1 is also the third in a row for an American act (after Taylor Swift and Juice WRLD), while overall this new No.1 set is the 314th chart-topper for an American Act (solo, duo, group, male or female), while the album is also the 393rd for a Group (local or overseas) and the twelfth No.1 album for a group in 2020, with the only other U.S. group hitting the top this year being Green Day on February 17th with “Father of All Motherf**kers”.

After four weeks at No.1 the latest Taylor Swift set “folklore” is down one spot to No.2 (it remains at No.1 in The U.S.A. for a fourth week), and with five Top 10 entries this week the other dropping sets from last week to score another week inside the Ten this week are “Legends Never Die” for Juice WRLD and “Shoot for the Stars, Aim for the Moon” by Pop Smoke (NZ & Canadian #1 LP this week) both down two places each to No.4 and No.5, while Harry Styles logs a 37th week within the Top 10 with “Fine Line” (4 to No.7) and Billie Eilish is down two spots to No.8 with “When We All Fall Asleep, Where Do We Go?” and spending a 72nd week within the Top 10.

Troye Sivan issued his fifth EP last week called “In a Dream”, and this week the six track set debuts at No.3, becoming his fourth Top 10 album in Australia and his second No.3 set, as his last album “Bloom” (2018) also made it to No.3. The set features three previously released singles in “Take Yourself Home” (HP-91, April 2020), “Easy” and “Rager Teenager!”. Another local act who is entering within the Top 10 with a new EP are Sydney’s hip-hop/drill group Hooligan Hefs, who enter at No.9 with “Living in Sin”, the groups first entry and thus also their first Top 10 placing locally.

A repackaged 2020 edition of the Kev Carmody tribute album “Cannot Buy My Soul: The Songs of Kev Carmody” debuted at No.6, surpassing the No.31 peak from the March of 2007 for the original album. The album has songs covered by acts such as John Butler Trio, The Waifs, Archie Roach, Troy Cassar-Daley, Tex Perkins, Paul Kelly, Steve Kilbey and Clare Bowditch among them, while this new expanded edition has Jimmy Barnes & Kasey Chambers, Electric Fields, Courtney Barnett and Kate Miller-Heidke among them. The fifth and final Top 10 entry this week is the fifteenth studio album for U.S. country singer Tim McGraw called “Here on Earth”, which comes in at No.10 and helps it become his third Top 10 placement here and overall his 20th Albums chart entry (13 studios, 1 collab and six compilations), with his two previous Top 10’s here being his previous album “The Rest of Our Life” (Collab#1, HP-9, 2017, with his wife Faith Hill) and “Two Lanes of Freedom” (LP#12, HP-10, 2013).

UP:
The first rise on the albums chart this week doesn’t occur until No.24, as ‘The Greatest Showman’ soundtrack is back up one spot to No.24, while the only other Top 50 soundtrack this week is for the Queen biopic ‘Bohemian Rhapsody’, which is stable at No.38. The second Post Malone album in “Beerbong’s & Bentley’s” is back up four spots to No.26, and The Weeknd is back up one spot to No.27 with his latest set “After Hours”, followed by a four place rise to No.28 for the Travis Scott set “Astroworld”.
Climbing collections and best of sets this week are by Maroon 5 (39 to No.33), Eminem (39 to No.33) and Cold Chisel (47 to No.44). Rising back up four spots to No.40 is the Billie Eilish EP “Don’t Smile at Me” and with a new song within the Top 5 the last Drake studio album “Scorpion” is back up three spots to No.42. The top two singles artists for this week are also back to back on the albums chart, just the opposite of what they are on the other chart. BTS debut at No.2 with their new single, while the album “Map of the Soul: 7” flies back up twenty-eight places to No.46, just one place ahead of the debut Cardi B album “Invasion of Privacy”, which rises three places to No.47.

FURTHER NEW ENTRIES:
* #22 (LP#1) – The Theory of Absolutely Nothing by Alex the Astronaut (AWAL/Warner) is the debut album for local Aussie artist Alexandra Lynn from Sydney, who has previously issued two EP’s in 2017 and a live album in 2019, while this is her first Albums chart entry.