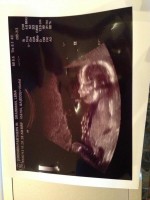 Disturbed/Device lead singer David Drainman has shared the view from the womb of his yet-to-be first-born child.

Samuel Bear Draiman is the unborn son of David and wife Lena Yada.

Lena is a Japanese-American model, actress and professional wrestler for WWE. She is also a backstage interviewer and WWE Diva for the ECW Brand.

Disturbed is currently in hiatus. David formed Device with Geno Lenardo of Filter in 2012. They released the ‘Device’ album through Warner Music in April, 2013.