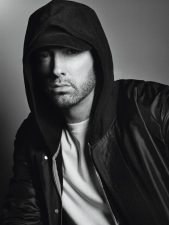 The man who broke into Eminem’s house earlier this year allegedly told the rapper he was there to “kill him”.

Matthew David Hughes stands accused of using a paving stone to smash a kitchen window and gain access to the hitmaker’s Detroit, Michigan property in April, setting off an alarm in the middle of the night.

According to testimony shared by Clinton Township police officer Adam Hackstock, Eminem – real name Marshall Mathers III – originally thought the intruder was his nephew, before he realised it wasn’t.

During the preliminary examination, Hackstock claimed that “when Mr. Mathers asked (the intruder) why he was there, he was told by Mr. Hughes that he was there to kill him”.

However, Hughes’ attorney Richard Glanda told Fox News that his client denies saying that, and added: “I’m not sure where (the officer’s statement) came from… There was no physical contact between the two in the house.”

Hughes has been in custody since the break-in, after which he was charged with first-degree home invasion and malicious destruction of property. He is being held on $50,000 (£41,900) cash bond, and Judge Jacob Femminineo, Jr. denied a request to lower the bail, stating that Eminem’s fame was not a factor in his decision.

The case will now head to an arraignment on 28 September, after the judge found probable cause to continue with a trial.

Eminem wasn’t present in court on Wednesday, but his attorney watched the proceedings via video link.