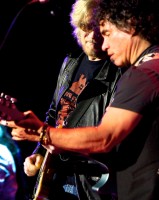 Hall & Oates are officially an Australian Top 40 act again, scoring their first Top 40 hit since ‘Out of Touch’ in 1984.

The song that has made Daryl Hall and John Oates pop stars again is their 1983 Christmas song ‘Jingle Bell Rock’. The song was released for the Christmas of 1983 as a 7-inch single. While it failed to make the chart back then anywhere in the world, it did have a resurgence in the USA in 2008 and 2011, firstly on Billboard’s seasonal Holiday Airplay chart and later in the Hot Holiday Songs chart.