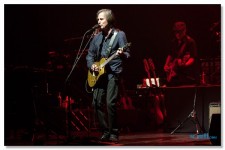 Jackson Browne performs at the Palais Theatre in St Kilda on Friday 1 April 2016.

Jackson Browne has dropped the brand new song ‘A Little Soon To Say’ but don’t get too excited about the title. It has nothing to do with him recently testing positive to Covid-19.

Browne is on record as saying the song is about now, but by now he means the environment, Greta Thunberg’s impact and the rise in young people vocalising issues.

A vinyl single of the song will be released on 29 May 2020 while Browne’s next album is due October 9.

Browne recently revealed he was diagnosed with Covid-19 during a trip to New York for a benefit concert.

The yet-to-be titled Jackson Browne album will be his 15th studio album and his first since 2014’s ‘Standing in the Breach’.