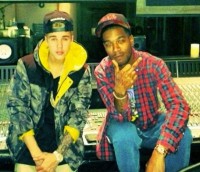 Justin Bieber and Kid Cudi in the studio Jan 2014

Justin Bieber ‘Journals’ fell from 35 to 50 in its second week on the ARIA chart. ‘Journals’ sold 1045 copies in week two bringing total sales to a grand total of 5653 copies sold.

Bieber’s unbeliebably bad sales come just weeks of the bratty popstar toured Australia. Bieber was seldom on time. In Melbourne he appeared on stage 70 minutes late prompting criticism for ignorance and disrespect of his teenage audience.

The Justin Bieber run of singles prior to the album release also failed to excite fans. Not one single from ‘Journals’ made the Top 20 ARIA singles chart.

The erratic behaviour of the popstar continued when he returned home only to tweet that he was retiring. A statement followed that from his manager that Bieber was taking a year off. Then over the weekend we heard that Bieber was already back in the studio working on new music.

Bieber spent the weekend recording with Kid Cudi. His most recent tweet said “I love music”.

Justin Bieber's spiritual mentor Carl Lentz has been fired from his position at the Hillsong Church East Coast due to "moral failures".

Justin Bieber has teamed up with Benny Blanco for a new tune, 'Lonely', and he shared a picture of what appears to be someone playing a younger version of himself in the music video.

Justin Bieber has hit back at an allegation of sexual assault recently made against him on social media.

Avril Lavigne and Justin Bieber Had A Lyme Disease Chat

Avril Lavigne once reached out to fellow Canadian popstar Justin Bieber over his battle with Lyme disease.

Justin Bieber, Avril Lavigne, and Michael Buble were among the stars teaming up on Sunday for a virtual sing-along to Bill Withers classic Lean on Me for Canada's coronavirus relief fundraiser.

Justin Bieber is refusing to feed into the negativity directed at him online following his Lyme disease reveal, insisting he only wants to "send back love".

Justin Bieber has dropped the new track 'Yummy', which will feature on his upcoming fifth studio album, and his frequent collaborator Jason 'Poo Bear' Boyd features as a co-writer and producer.