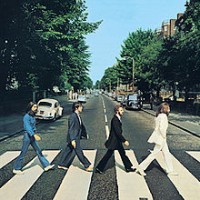 A lost guitar solo by George Harrison has been discovered by his son Dhani.

Dhani was in the studio with producer George Martin and his son Giles Martin listening to the original master tape of Harrison’s ‘Here Comes The Sun’ for The Beatles 11th album ‘Abbey Road’. Dhani pushed by a fader on the sound desk and up it came.

“It is totally different to anything I have ever heard,” Dhani is heard saying. “I had forgotten about that,” George Martin says. “I never even knew about it,” adds Dhani.

George Martin, who produced the Abbey Road album, looked stunned when he heard it again after 43 years. Until now, the guitar solo had never been heard outside the walls of Abbey Road studios in London.

George Harrison’s son Dhani has announced a $500,000 donation to MusiCares COVID-19 Relief Fund, Save The Children and Doctors Without Borders and released his own version of his father’s ‘The Inner Light’.

Norah Jones and Dhani Harrison wrapped up George Harrison week on the Conan O’Brien show this week with performances from George’s Apple Catalogue.

Dhani Harrison, the only child of Beatle George Harrison, married on the weekend and former Beatles Paul McCartney and Ringo Starr attended.

Paul McCartney’s son, James, likes the idea of a new generation Beatles group with the sons of Ringo, George and John.