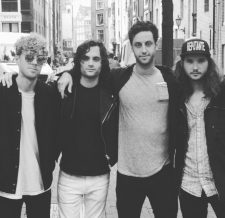 Netflix ‘You’ star Penn Badgley has a band called Mothxr

So far there has only been one album ‘Centrefold’, released in 2016.

Badgley starred as Dan Humphrey in Gossip Girl from 2007-2012. He has also appeared in an episode of Will & Grace and The Twilight Zone. Badgley also had a recurring role as Chance in The Young and the Restless from 2000-2001.

Fun fact Penn Badgley is married to Domino Kirke, the daughter of Free and Bad Company drummer Simon Kirke. She fronted the band Domino with Jordan Galland and recorded an EP produced by Mark Ronson. Galland plated piano on Ronson’s album ‘Version’ and co-wrote with Daniel Merriweather for his ‘Love & War’ album.

You is based on the 2014 novel by Caroline Kepnes. Badgley’s character Joe is a New York bookstore manager who falls for customer Guinevere Beck (Elizabeth Lail) and will (literally) kill for her.

You has been picked up for a second season.