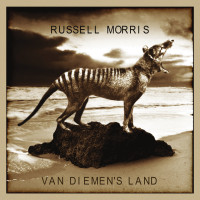 Russell Morris has introduced his next album ‘Van Dieman’s Land’ with the blues track ‘Breaker Morant’, featuring Scott Owen of The Living End.

‘Van Dieman’s Land’ is the sequel to the platinum selling, ARIA Award winning ‘Sharkmouth’, which after 81 weeks in the ARIA album chart is still in the Top 100 best selling albums.

Mitch Cairns has once again produced ‘Van Dieman’s Land’ with Russell. Mitch was also the producer of ‘Sharkmouth’.

‘Breaker Morant’ was written by Russell Morris and Shannon Bourne. The song tells the tale of Harry ‘The Breaker’ Morant who fought in the Boer War with the South Australian Rifles.

The 1980 movie on the life of Breaker Morant starred Jack Thompson and Edward Woodward.

“I spent over a year researching these great Australian stories,” Russell says. “To me these albums are about looking back at the characters that deserve to be remembered and then doing that in the best way I know how—through song. It’s about leaving a legacy that in fifty years time, someone can put these records on and learn something about the spirit of our great country, in the same way we do when we read The Man From Snowy River.”

Regional Touring’s One Electric Day has been officially scratched for 2020.

Zoot's Australian tour has been delayed for 11 months until October 2021 while the world settles over coronavirus.

Russell Morris has been announced as the headline act for Drive-In Concerts Live in Brisbane on 13 June.

Kevin Borich Has A New Song With Russell Morris

Kevin Borich has recruited Russell Morris for one track off a Borich duets album coming 2020.

10cc and Russell Morris played Melbourne Zoo Twilights on Friday 21 February and delivered more hits than any other Zoo show is capable of this season.