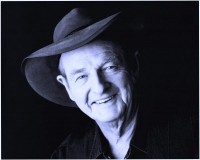 He was the first Australian to have a number one hit when ‘A Pub With No Beer’ topped the chart in 1958. The song was re-recorded as ‘Bar With No Beer’ by American singer Benny Barnes in 1960 and later also recorded by Tom T. Hall and Johnny Cash.

Slim Dusty holds the record for the longest artist ever signed to EMI Records. It was his only record label in over 50 years of recording and he released over 100 albums through the label.

Slim was the first artist ever played from a space shuttle when astronauts in 1981 played his version of ‘Waltzing Matilda’ was they passed over Australia.

Slim and wife Joy McKean were Australian country royalty. Cold Chisel’s Don Walker in remembering Slim today said, “Today 10 years ago Slim Dusty passed away. He was a pioneer, imagining them living a life no one else could conceive. Six decades of music that paints this country like nothing else.”

Slim died from cancer at his home in Sydney in 2003. He is survived by his wife Joy McKean and children, country stars Anne Kirkpatrick and David Kirkpatrick.

With the release of the third Jimmy Barnes book ‘Killing Time’ Jimmy has released a new version of the song originally recorded with Cold Chisel, this time with the Australian Chamber Orchestra.

While 2020 is arguably the most horrific year globally in decades for Jimmy Barnes it has given him time to reflect and find comfort staying a home.

Jane Barnes Thanks Jimmy Barnes Fans For The Well-Wishes

Jane Barnes has thanked fans of Jimmy Barnes for this best-wishes after Jimmy was suddenly taken to hospital this week.